Gladiator Events we've taken the cult TV show Gladiators and given it a team building twist. Participants become gladiators or contenders and join forces to face a series of fast and furious team challenges! Giant inflatables, obstacles and huge puzzles will put their team work skills to the test.

If you're looking for a fun team building event that's a little different from the average activity, The Gladiator is a great place to start.

Discover the identities of the team's hunters and wolves and find out who moves like lightning under pressure!

The Gladiator begins with a welcome and brief from our events facilitators. They will be on hand to run the event and take care of team scoring.

We supply all the equipment needed, all you have to do is turn up.

After the initial briefing, the group is split into 2 camps: gladiators and contenders. Our events facilitators will get everyone warmed up and in the mood for the day's team building challenges. All challenges require full team participation so no-one ends up sitting on the sidelines.

Teams will tackle a number of challenges, including:

Standing on inflatable podiums, gladiators and contenders attempt to knock their opponents off balance using a giant swinging ball. The team that can collaborate successfully to keep the ball away from the other side stands the best chance of winning.

Teams compete to scale a 15ft wall and retrieve pieces of a giant puzzle. They must use team work principles to be in with a shot of completing the puzzle before the whistle blows. You'll need speed, a cool head under pressure, brains and brawn to win this one.

The head-to-head boxing challenge is a test of brains and brawn. Who will use strength in conjunction with strategic thinking to claim the title?

The game consists of a giant inflatable course. Compete head to head across the course wearing a hat containing a cup full of water. The more water you keep in the cup the more points the team get. Victory is achieved by the amount of water measured. The team with the most water wins.

Battle Of The Bungee

Contenders and gladiators charge up an inflatable run as fast as they can before being snapped back to the start by the awesome power of bungee. The winner is the one who gets furthest along the run. Half the battle is not collapsing in a fit of the giggles!

You've heard of Zorb running - but have you ever heard of a zorb relay? This 'X'-treme version of Zorbing combines a head-to-head relay race with x-shaped track, for the most frantic contest ever! Mayhem is guaranteed!

The grand finale decides which team will be ultimate fighting champions. The team with the most points starts first. Charge, wobble and bounce your way through our giant inflatable obstacle course, collecting as many tokens as you can pick up. Watch what you're grabbing! Some tokens mean big bonuses but others incur penalties. Grit your teeth and go for it! 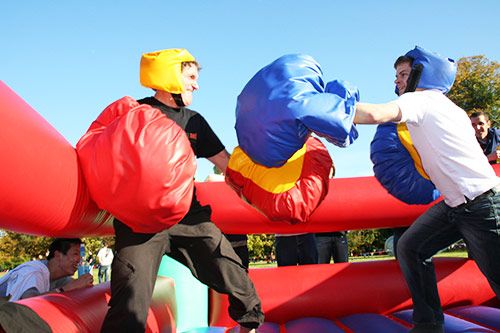 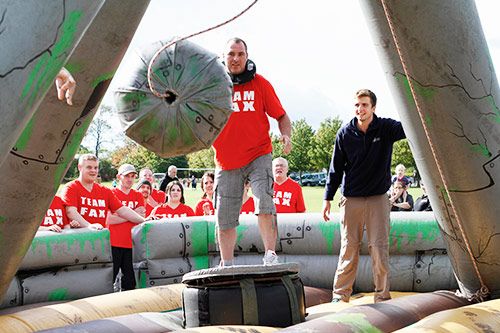 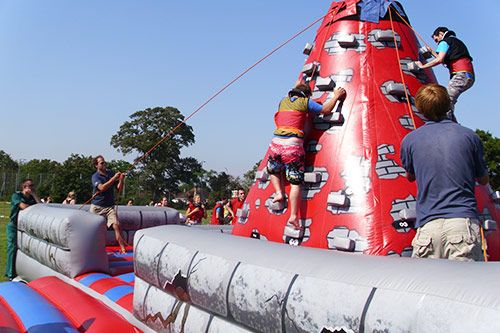