Live the dream and compete in Office Olympiad, ateam building event that gives mere mortals their moment of glory! Each teamrepresents a country and competes in six fun events that require brains, brawn,teamwork and a will to win!

Has your team got what it takes to claim the topspot on the winners' podium?

There's an Olympian in all of us! Unleash yourinner Usain Bolt with a team building event that channels the spirit of theOlympics. The Office Olympiad features six very different events that give allteam members a chance to shine by showcasing their existing skills anddeveloping new ones.

On arrival, guests are briefed and split into teams. Each team represents a country. Each country gets an information pack and a flag. As you win competitions, you'll stick a star on your flag. So you can fly your achievements proudly, for all to see!

Wise leadership and delegation are vital. Some events require all team members whilst others call for those with specific skills and talents. It's up to each country to allocate roles wisely and decide which members are best suited to each event.

After briefing, stirring Olympic music fills the air and the games begin!

Countries compete in a series of challenge zones. The country with the most stars on their flag at the end of the games wins Office Olympiad.

Hop, skip, and jump from a standing start. Who can cover the biggest distance?

Fling the spear and hurl the heavy ball! Which nation will triumph in the ultimate field event—and who will end up flat on their backs?

Make like Jessica Ennis-Hill and hurdle your way to glory. This one's all about rhythm. Find your groove, or take a tumble!

Think garden darts and boules are relaxing?Think again! With the competition heating up, every throw counts. Can you handle the pressure?

Our life-size version of the beloved pub game puts humans in the place of plastic players. This is footie at its fastest and funniest! All the team building action takes place on a giant inflatable pitch,with players attached to moving bars. Has your country got the coordination and collaboration to score goals and claim victory?

Dive into our ‘pool' to perform a routine with a difference! The only non-blindfolded member of your team must create and direct a winning show in only 15 minutes.

Competitors charge up an inflatable run as fast as hey can, before being snapped back to the start by the awesome power of bungee. The winner is the person who reaches the farthest point. But watch out-the farther you get, the harder you fly backwards when the bungee cord does its thing! We call this hilarious effect the ‘Backwards Long Jump'…

Choose the best fighter to represent your country in our bouncy boxing challenge! Countries go head-to-head in an inflatable ring to win the world title. 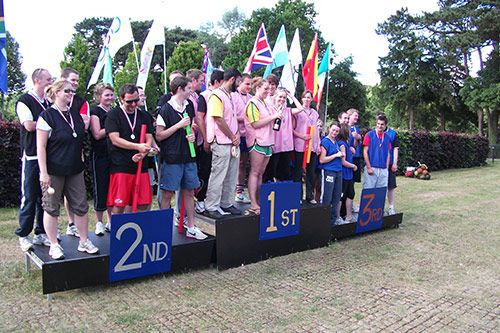 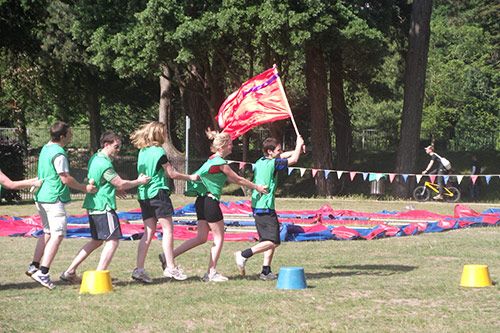 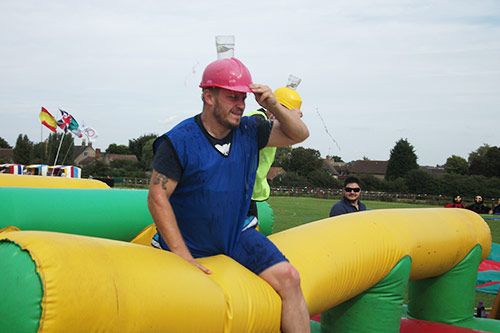