Are goals useful? That's the question I'm asking this week, as I take a look at the most goal-oriented away day activity on the market: the shooting range.

Many businesses find that goal setting doesn't make a bit of difference to their performance. They decide to increase revenue by £1m every year, then go about their daily routines, operating on the same level, capturing the same audience for the same sales. At the end of the year, everyone's left wondering what happened to that elusive target. The conclusion they draw: setting an end goal simply doesn't work.

Consider the bullseye. There it is, at the end of the shooting range. Its little yellow disc winks at you in the sun (or under the fluorescent lights, if you happen to be attending an indoor shooting event). That is, literally, your target. It's the end goal you're working towards.

But deciding to hit it isn't magically going to make it happen. You need skills. To strike that bullseye with arrow or bullet, you'll have to master the art of loading, aiming and firing your weapon.

These drills are the intermediate goals: a series of smaller steps, which stand between you and the target.

In the business landscape, they could include a traceable pattern of sales follow-ups, an upselling drive or an active search for new custom. Get on social media and incentivise existing customers to come back for more. Fish for referrals. Offer reduced prices on complementary products at the point of sale.

On the firing range, they're the stages between knowing you want to hit the bullseye, and understanding how to hit it. Like finding out how your weapon works, and where to point it if you want to correct your aim for windspeed or trajectory.

No-one ever achieved a series of bullseyes by wandering onto a shooting range, picking up a gun and blasting away. Before a bullet can leave the chamber, you need to know where the safety catch is.

A good, clean shot follows a definable pattern of stages, which look like this:

These are intermediate goals, laid out in an order you must follow to punch a hole in the centre of the target. Importantly, each one is measurable. Equally importantly, you can't progress in any other way: you have to achieve each intermediate goal in turn, or the shot doesn't happen.

Some measurements are self evident: if there's a round in the chamber or an arrow on the string, then you've loaded your weapon, and are ready to take aim. Others require a period of objective assessment. Do you feel ready? Check your stance. Is it similar to the stance you were taught? Are your feet firmly planted, is your weight evenly distributed, are you holding the weapon correctly?

The breathing stage is a period of final assessment, during which you look back over the preceding stages to check every one of them has been completed fully. Once you're satisfied, you can take the plunge and complete the action. Draw a final long, slow breath, hold it, and, as you release it gently, squeeze the trigger… 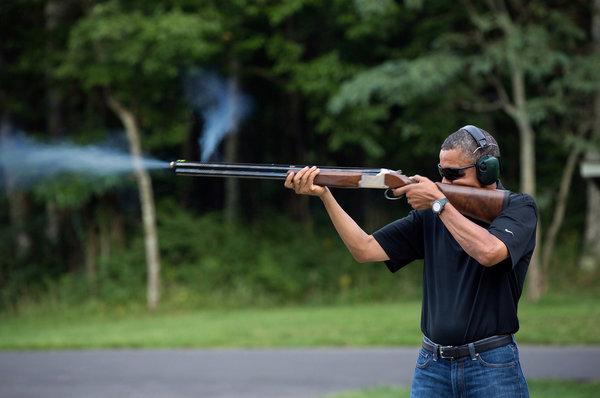 Once you've hit the target, you'll want to build on your success.The original end goal of your programme isn't intended to be a one-time high point for your sales figures or reach. It's a new base line, from which you can begin to shoot for new benchmarks.

On the firing range, success is achieved via follow through. This is a smooth movement, in which you raise your arms after the shot, and bring them gently back to rest in the original firing position. Following through allows you to develop a natural correction to shifts in orientation that occur when the gun kicks, ensuring you fire rapidly and accurately through the whole clip of ammunition.

In the office, the follow through isn't so cyclical. Rather than aiming to return to a neutral firing stance at the end of your goal-oriented project, you're looking for a stepped evolution into the next phase of company development. When you get there, though, these same skills will be the things that keep you hitting your marks as you strive for your next measurable success.

Turns out goals are useful after all. You just have to know how to lead up to them. Rack another round in the chamber, flick off the safety, and aim true.